Our goal is quality

The quality management concept included in ISO standards is based on two principles. First: it is better to prevent rather than discover and repair defects. Second: the best quality impact area is an organization understood as a company management system.

At Instalcompact, we have implemented Integrated Management System in accordance with ISO 9001:2008 and ISO 14001:2004, which we use not only at the design or production stage, but also in daily functioning of the Company. Thanks to this, we minimise the risk of occurrence of costly deficiencies, mistakes and misunderstandings, as well as reduce production costs and negative impact on the environment, at the same time increasing the satisfaction of our Customers.

Efficiency and effectiveness of the functioning of Integrated Management System in accordance with ISO 9001:2008 and ISO 14001:2004 has been confirmed at Instalcompact with the positive result of system audit performed by an independent organisation, TÜV SÜD POLSKA. 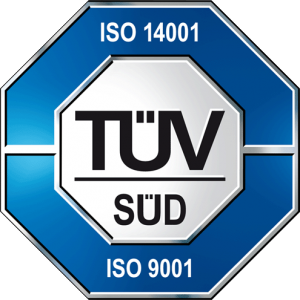 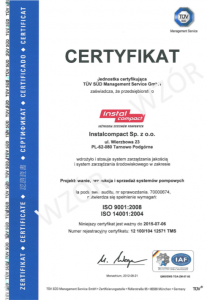 Health and safety at work are most important

Ensuring the safety and the best possible working standards for our employees is one of our main goals. We fulfil it particularly by trying to:

We minimise our ecological footprint

We are aware of the negative impact of our company on natural environment and we undertake to perform systematic activities intended to limit this impact by fulfilling the following goals:

… standardisation is an integral part of the quality support process, and a reliable quality system cannot be developed without standards

At Instalcompact, we use standardisation which improves our work. This is possible thanks to the implemented and maintained standards which: